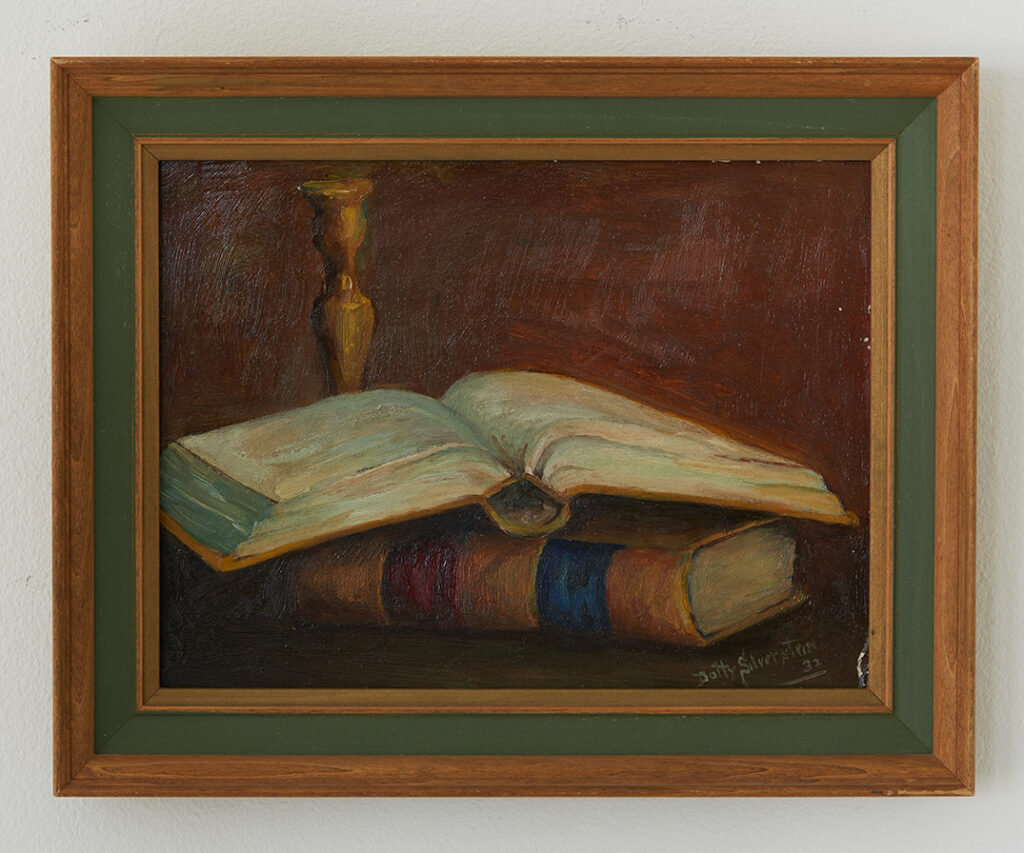 Women of Dottie Silverstein Stevens’ generation came of age in a time when most occupations were not open to them. And self-promotion frowned upon.

Their work was in the home: raise the family, keep a nice, clean and orderly household, serve as gracious hostesses or guests and be good helpmeets, volunteer in the community, and get together for bridge or mahjong with “the girls.”

They could have hobbies: cooking, painting, playing piano.

But to work outside the home, much less to promote one’s artistry in the marketplace, would be frowned upon.

“Father Knows Best” was not just a TV show, but a way of life.

Mom was typical of her era in that she did all of the above, and without reproach. But her passion was for her art.

She painted, sculpted, took classes, taught them…and never let go of the question that drove her all her life: “What is art?”

All the while, seeking to capture her own version of it.

Even though she thought “selling” herself and her work was unladylike, she found a way. Dottie entered juried art shows, and won. When her paintings sold, she kept detailed records about the purchaser, price, and date of sale, along with a Polaroid or Kodak picture.

She kept records of it all on file cards, painstakingly handwritten, with xerox copies in loose-leaf binders—this being the days before computers could spit out copies on demand.

A Teacher, a Poem and a Shadow as Gift for a Lifetime

In Dottie’s own words:

From the very beginning, it was all based on an innocent, naïve misconception.

In elementary school, we had a wonderful teacher who inspired all the children in a very clever way. She promised a special reward if we behaved and worked hard.

She would read a poem to us and then let us draw a picture about it. One day, our reward was a charming little poem by Robert Louis Stevenson, “My Shadow.”

I have a little shadow that goes in and out with me,

And what can be the use of him is more than I can see.

He is very, very like me from the heels up to the head;

And I see him jump before me, when I jump into my bed.

After reading it aloud, we all took out our crayons to draw a picture about the poem. As Teacher walked around the class, I was surprised when she paused at my desk and asked me to come to the front of the room and hold up my picture.

Then, she proceeded to take me to all five other first-grade classes to display my “work of art,” to hold up my drawing in front of all the other children as an example.

Mom never thought to question why.

When little Dottie told her mother about this honor, my grandmother immediately proceeded to buy the six-year-old a beginner’s set of oil paints, a small palette, and a canvas board. She was signed up for art lessons after school and, in time, made her first oil painting—a copy of a beautiful lady by Thomas Gainsborough (note: this painting is in the retrospective).

From Hobby to Profession

Art became a major part of her life. She pursued formal training in great art schools, beginning with the Cincinnati Art Academy in the 1930s, the Cincinnati Art Museum and later in universities and museums. During World War II, she studied at the Chicago Art Institute and did graphic art design working for the Manhattan Project in Chicago.

She was inspired by the Impressionists, and first copied, and later innovated on their style. She began experimenting with sculpture and printmaking, and ceramics.

Extensive travel with her husband, David Stevens, further enriched her experiences, and many of Dottie’s paintings took their inspiration from their travels around the world, making it altogether fitting that the proceeds of the art auction will go towards funding a scholarship for AAC students to study abroad.

In her 90s, when the physical processes of painting and sculpting became too demanding, Mom turned to writing. She wrote a play, “What is Art?” to explore this question using words as her medium.

And after she gave up painting and sculpting, she used to say she was always painting in her mind. For her, art became sustenance.

But she never got over thinking that the drawing that launched a career and a passion for art was really a happy mistake.

Thinking about that early inspiration, I can’t believe there was really anything aesthetically remarkable about my picture.

My guess is, that while other kids were naturally drawing a little child with its detached shadow somewhere nearby, perhaps my portrayal showed a little girl with her shadow attached to her feet, and with its shadow laying horizontally on the ground, as shadows do, according to the laws of physics and the direction from which the light was slanted.

In any case, because of my early misinterpretation of my first-grade teacher and her encouragement, a subsequent whole world of art opened up to me.

It is fitting, then, and a great thrill for her family that, having started with the early inspiration of a teacher, Mom’s art, and the Wilder scholarship it endows will pay it forward: to support, to inspire, indeed, to fuel, an art-filled future for students at the Cincinnati Art Academy for generations yet to come.

Robin Stevens Payes, daughter of artist Dottie Stevens, is a Maryland-based author, science writer and storyteller who takes teen readers to the Edge of Yesterday through her time travel novels and “learning through story” interactive adventure portal.