Be a part of our creative community. Fuel the art and stay in the know. Consider a one-time gift, or scroll down to check out other creative support options.

When you support AAC, you change lives. You empower students as they explore their own individual expression. You aid our community members as they cultivate their own voice and their own vision – and you ignite the talent that will keep tomorrow’s society bright.

"My Art Academy education trained my mind to think. It encouraged me to take risks, discover, embrace, and express my own individuality. To make interesting and amazing mistakes. Break rules. Leave the world more interesting. That all the best ideas come out of the process and out of the work itself." 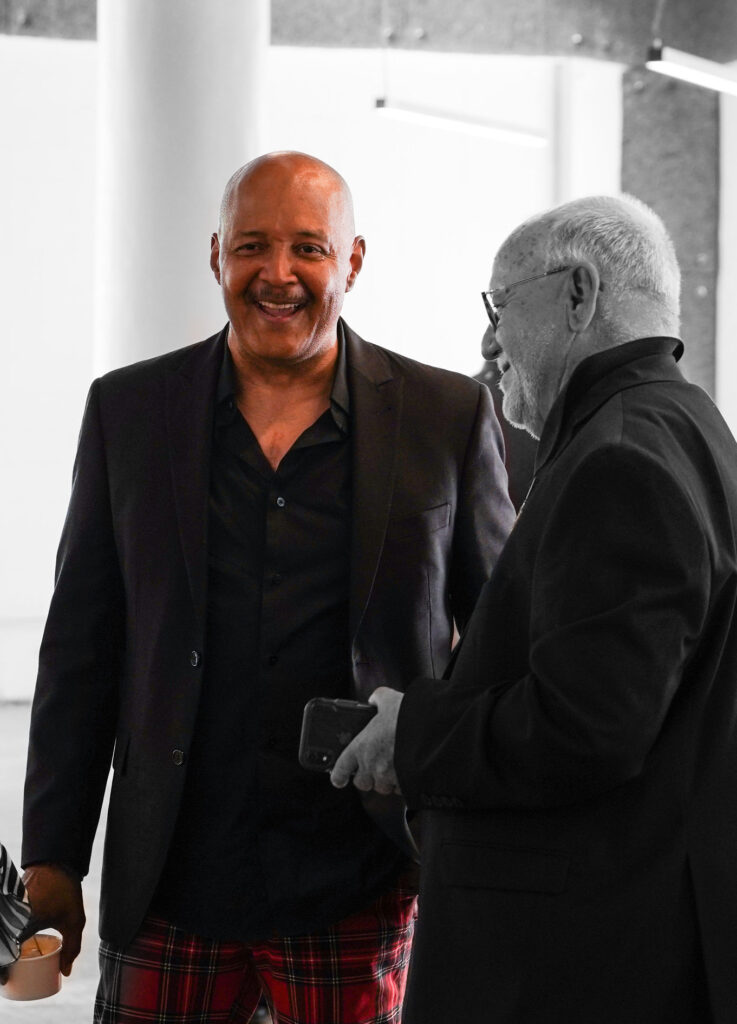 Instead of choosing to make a conventional thesis exhibition, Derrick Dankwa (AAC 2015) broke the mold. He wowed the AAC community by creating a series of musical performances and recordings to showcase his ingenuity and passion for his craft. Now, we are honoring Derrick by creating sound editing studios at the Art Academy of Cincinnati.

Give to the sound studio fund

A WORLD OF WAYS TO SUPPORT AAC

The ways you can give to support the academy are as varied and unique as you are. Consider the following options for aiding us in our mission, or let us know if there’s another avenue of gifting that works well for you.

Please contact our office to make these gifts. (Sometimes there is specific information that we need to have in order to accept your donation. Reach out, allow us to thank you in person, and we’ll make this happen as easily as possible!) 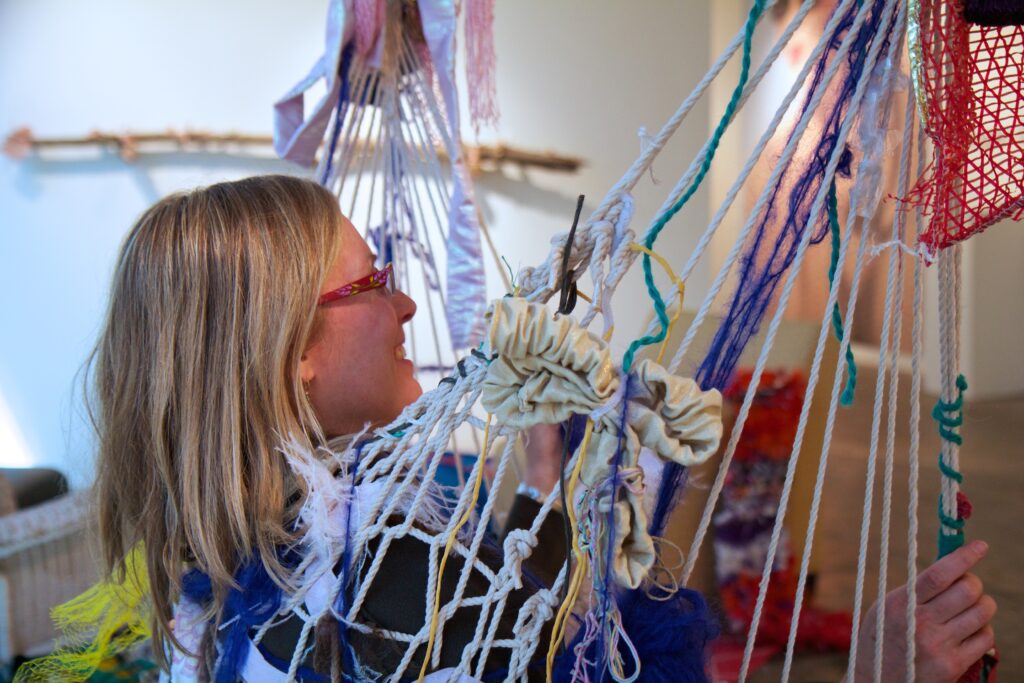 The Art Academy of Cincinnati

And, as always, we’re happy to take one time donations. Thank you for your creativity and generosity!

Thank you to all of the generous donors over the years who have helped support the AAC, and make many student’s dreams come true.

Click the circle name text to read more about the history of each historically important alumni, and view the donor list. 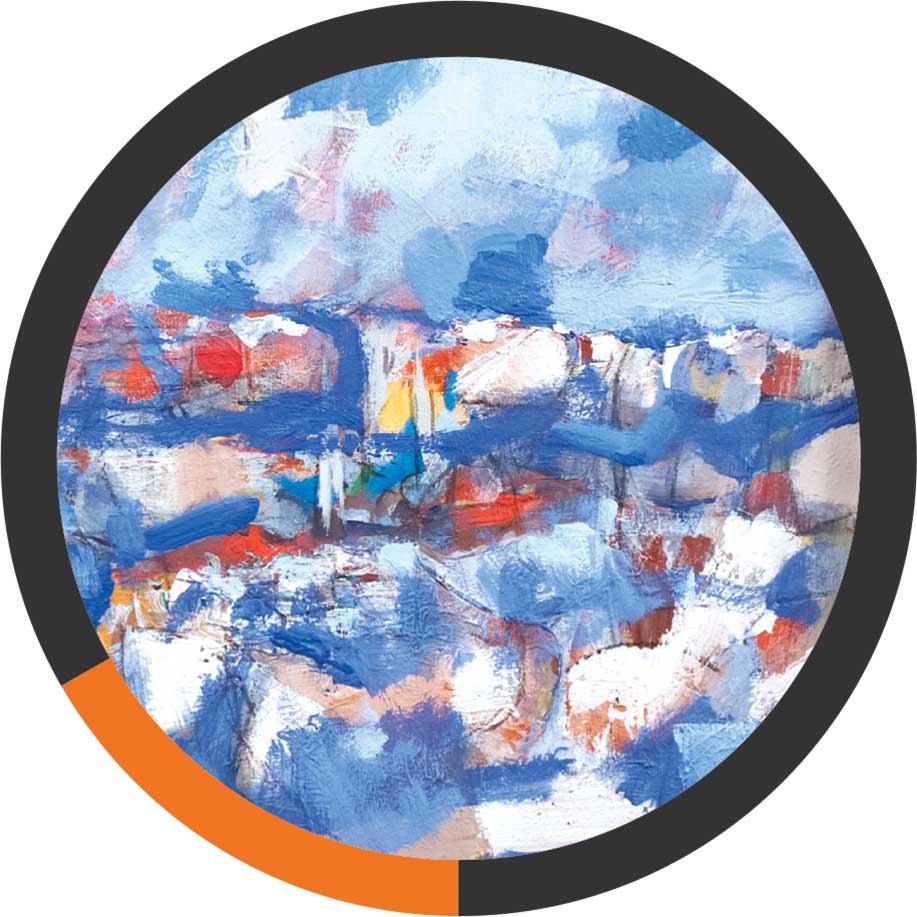 Paul Childlaw was born in Cleves, Ohio, in 1900 to Edward H. and Carolyn Guise Chidlaw.

From 1919 to 1923, he studied at the Art Academy of Cincinnati. After finishing his studies, he became a designer for commercial films in Cincinnati, a job he held until 1927 when he left the country to study at L’École des Beaux-Arts de Fontainebleau in France, founded in 1923. From 1928 to 1932 he studied with the artists Jean Despujols and André Lhote.

Childlaw painted in oil, watercolor, acrylic, etchings, pastel, charcoal, and pencil He and Artist Julian Stanczak became life-long friends while teaching together at the AAC together in the late 1960s. At his death, Chidlaw’s studio contained a number of artworks he had acquired from Stanczak.

A gallery at the Art Academy of Cincinnati is named for him honoring his place as one of the finest and earliest abstract expressionists of the 20th century in the Cincinnati area. His artwork is displayed in the Cincinnati Art Museum and at Xavier University.

Chidlaw was afflicted with macular degeneration later in life, but continued to create black and white drawings daily relying on his peripheral vision. He died in 1989 at the age of 89. 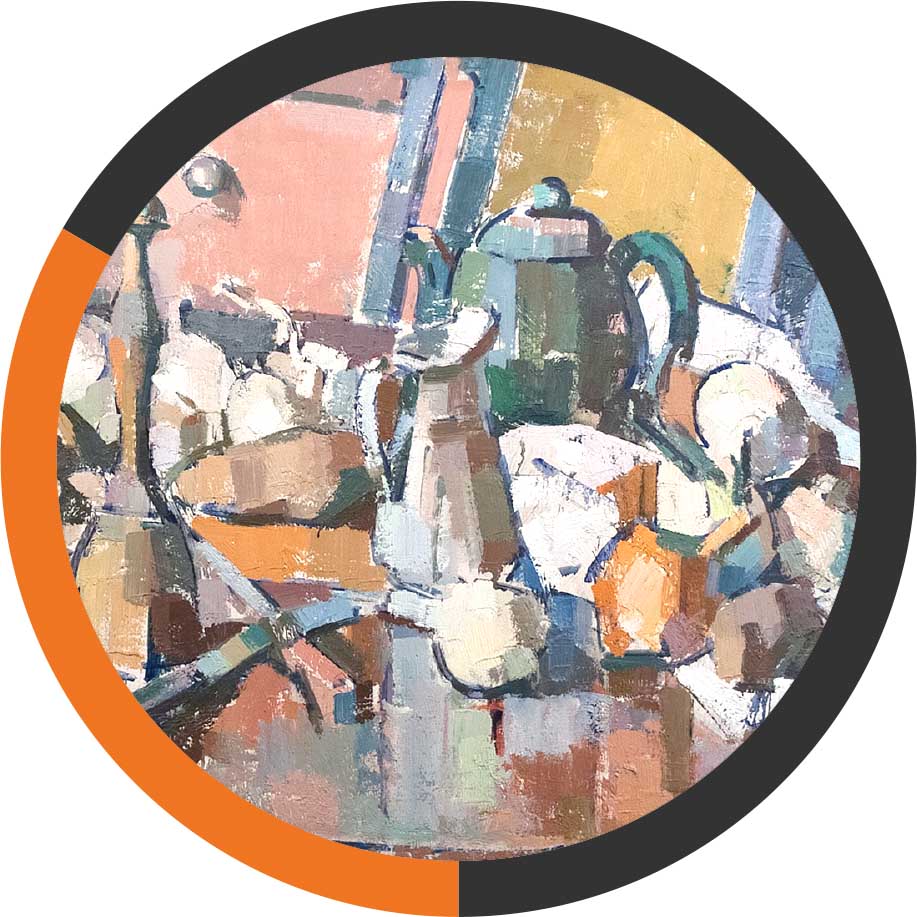 Herbert P. Barnett was born in Providence, Rhode Island, in 1910. An artistic prodigy, he had his first international solo shows at age 17. He studied at the Rhode Island School of Design, the Boston Museum of Fine Arts and in Europe from 1929 to 1932. He headed the Wooster (Massachusetts) Museum of Art from 1940 to 1951. In addition, he taught painting at the University of Vermont and the Norfolk Art School at Yale University.

Barnett’s oil paintings depict the majestic landscapes of Cape Ann, country still lifes, and portraits of mid-20th-century figures. Barnett references the work of Cézanne and early cubists, with contrasting directional planes of color and commonplace subject matter. His work is characterized by visible evidence of its own process, with initial sketches discernible in dark paint.

In 1951 Barnett became dean of the Art Academy of Cincinnati, a position he held until his death in 1972 at age 61. 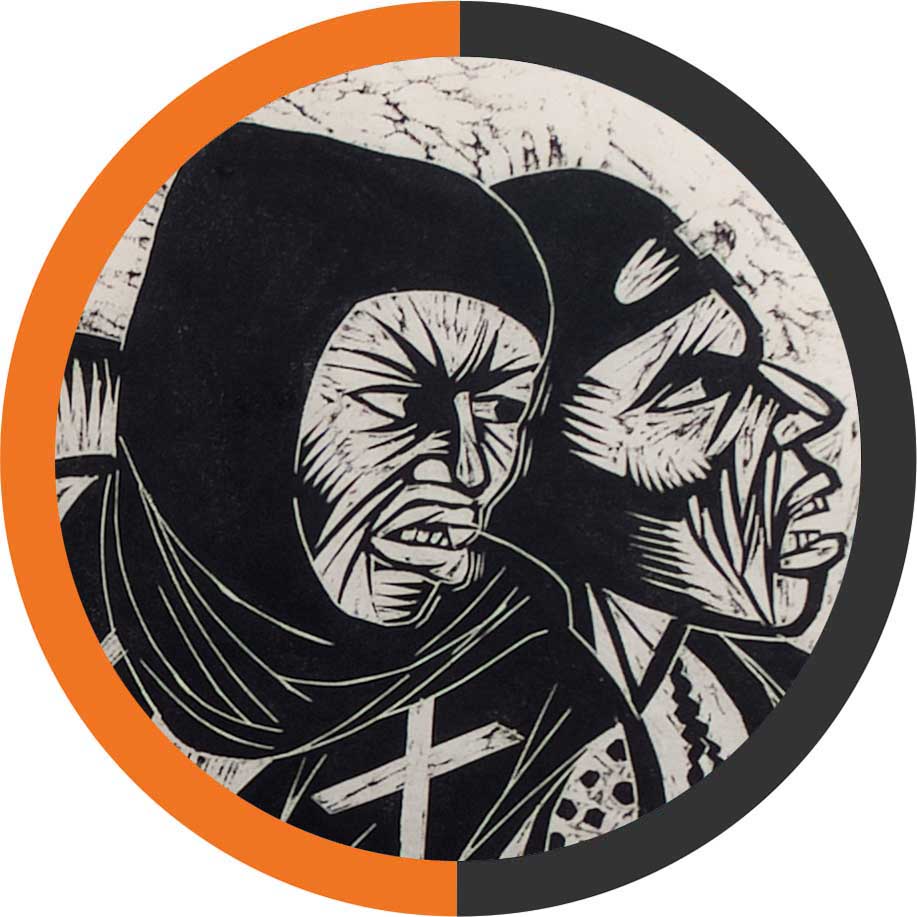 Thom Shaw created stark black-and-white woodcuts that unflinchingly portrayed the lives of people struggling with poverty, particularly black families in crisis. His art was shaped by the world he lived in as well as his personal struggles with chronic illnesses. Born in Cincinnati in 1947, he was the eldest of 10 children. Shaw graduated from the Art Academy of Cincinnati, earning his BFA in 1970.

He worked at Cincinnati Bell as a graphic designer from 1965 to 1992, all the while pursuing a parallel career as a professional artist. He eventually devoted his energies entirely to his art. In 2003, AAC presented Homecoming, a solo exhibition of his beautiful and disturbing large-scale black-and-white relief prints, very suggestive of violence. His images told stories set in the poorest ghettos, where gangs roamed, veins bulged, brows furrowed and everyone was always yelling. In 2005, Shaw was the Duncanson Artist-in-Residence at Cincinnati’s Taft Museum of Art. During his career his works were exhibited at sites as diverse and far-flung as the Studio Museum in Harlem and the Jenewein Gallery in the Czech Republic.

In 2007 Shaw was AAC’s commencement speaker and recognized with an honorary doctorate. By then he had struggled with illness for more than a decade. His art continued to reflect fractured social images (Poverty’s Paradise) and his own declining health (The Big Hurt). His work was consistently confrontational, telling desperate stories portraying urban life in desperation and upheaval. Nevertheless, he tempered his righteous anger with glimmers of hope that civilization might evolve. He passed away on July 6, 2010, due to complications from diabetes. 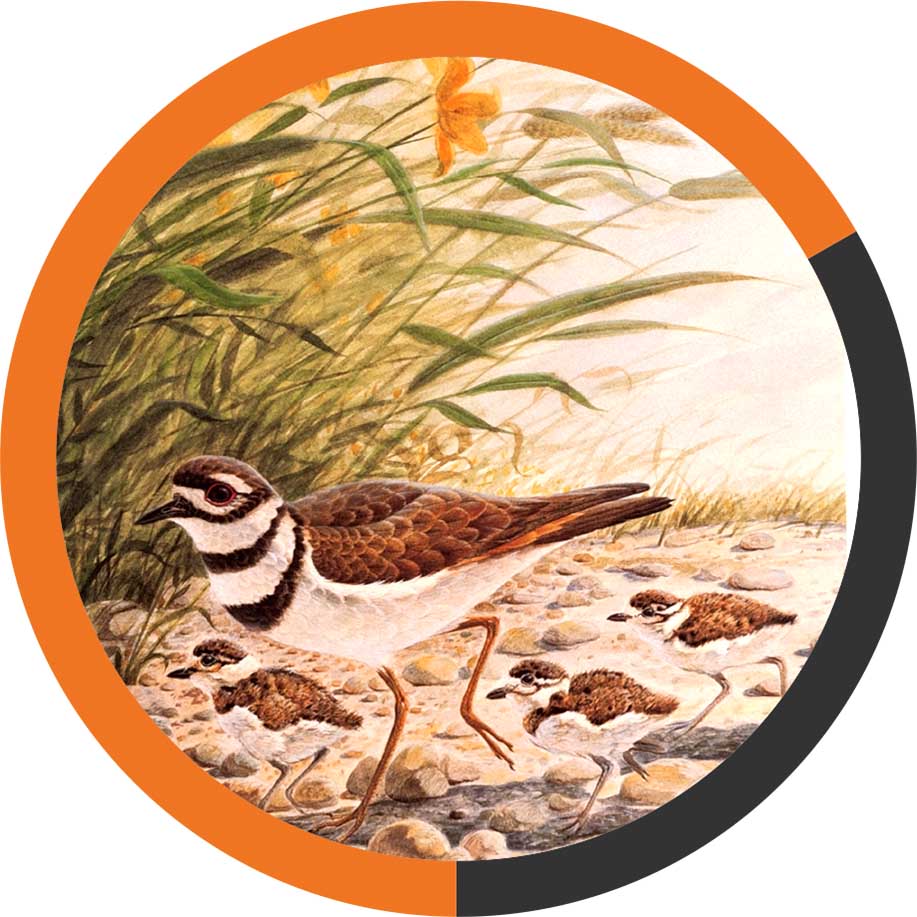 John Ruthven was born in Cincinnati, in 1927. His fascination with wildlife began when he was a young boy. Growing up in Walnut Hills, he visited the Ohio River and thought about the birds painted by the great American wildlife artist John J. Audubon. After serving in the U.S. Navy in World War II, Ruthven returned to Cincinnati to study at the Art Academy of Cincinnati. In 1946 he opened a commercial studio with the goal of a career in wildlife art. In 1960 he designed the Redhead Ducks stamp for the U.S. Post Office.

Ruthven, often referred to as the 20th century Audubon, has been included in many important wildlife art exhibits including: The Artists of America exhibit in Denver, Colorado, and The Society of Animal Artists traveling exhibit. A major retrospective of his work, John A. Ruthven “In the Audubon Tradition”, was held at Cincinnati Museum Center in 1994.

In 2015 Ruthven was honored with the Eloise Payne Luquer Medal from the Garden Club of America for his achievement in botany. In addition, Ruthven received the prestigious National Medal of Arts in 2004 from President George W. Bush. Ruthven lives and continues to paint on a farm in Georgetown, Ohio. 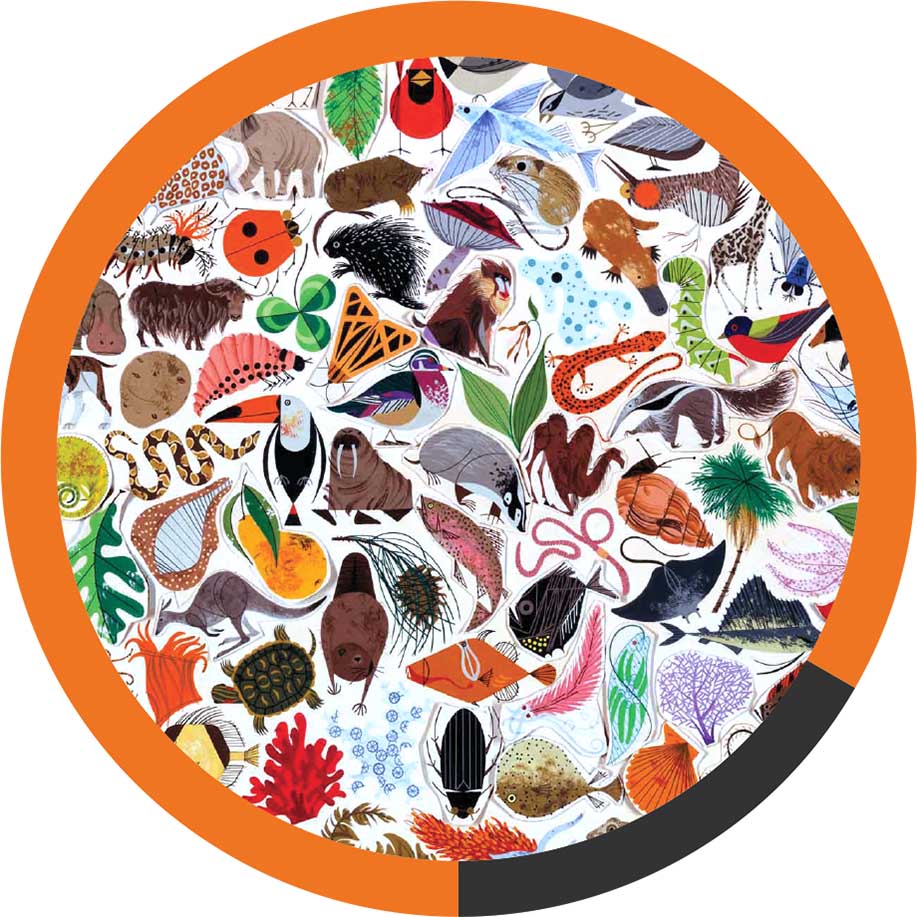 Charley Harper was born in on August 4, 1922, in Frenchton, West Virginia. He was brought up on his family’s farm and was greatly influenced by these surroundings throughout his life. He briefly attended college at West Virginia Wesleyan College before moving to Cincinnati to follow his dream of becoming an artist. Edith Riley McKee was an only child born in 1922 in Kansas City. In the 1930’s her family moved to Cincinnati when Edie’s father landed a position with Procter & Gamble. They lived in an apartment on Springfield Pike while Edie attended Wyoming High School and in 1940 she entered the Art Academy of Cincinnati.

Edie and Charley Harper met at AAC where they shared classes and admiration of painters such as Miro and Klee. When Charley was drafted for service in World War II, Edie interrupted her classes to support the war effort as a photographer. She photographed hydro dams and cement test samples and processed the film in the lab for the Corps of Engineers. Later, she would receive critical acclaim for the black and white photographs she took with her 8 x 10 camera employing her own imaginative subject matter. After the war, Edie and Charley resumed their studies at the Academy: they graduated and married in 1947. Following graduation, they embarked on a six-month camping honeymoon throughout America that was financed in part by Charley’s Wilder Traveling Scholarship. He was the first winner of the grant, which continues to be awarded to graduating seniors at the AAC today. Upon his return, as a condition of the award, Charley was required to give to the AAC one of the paintings he had created during his travels. His small painting of a clapboard house among a grove of sycamore trees still hangs in the school.

Over the years, Charley’s illustrations appeared in Ford Times, a travel magazine published by the Ford Motor Company; Childcraft and World Book Encyclopedia. He has created works for the National Park Service, the Cincinnati Zoo, Cincinnati Nature Center, and Hawk Mountain Sanctuary in Pennsylvania to name a few. Charley Harper died in 2007 at the age of 84. Edie died in died in 2010 at the age of 87 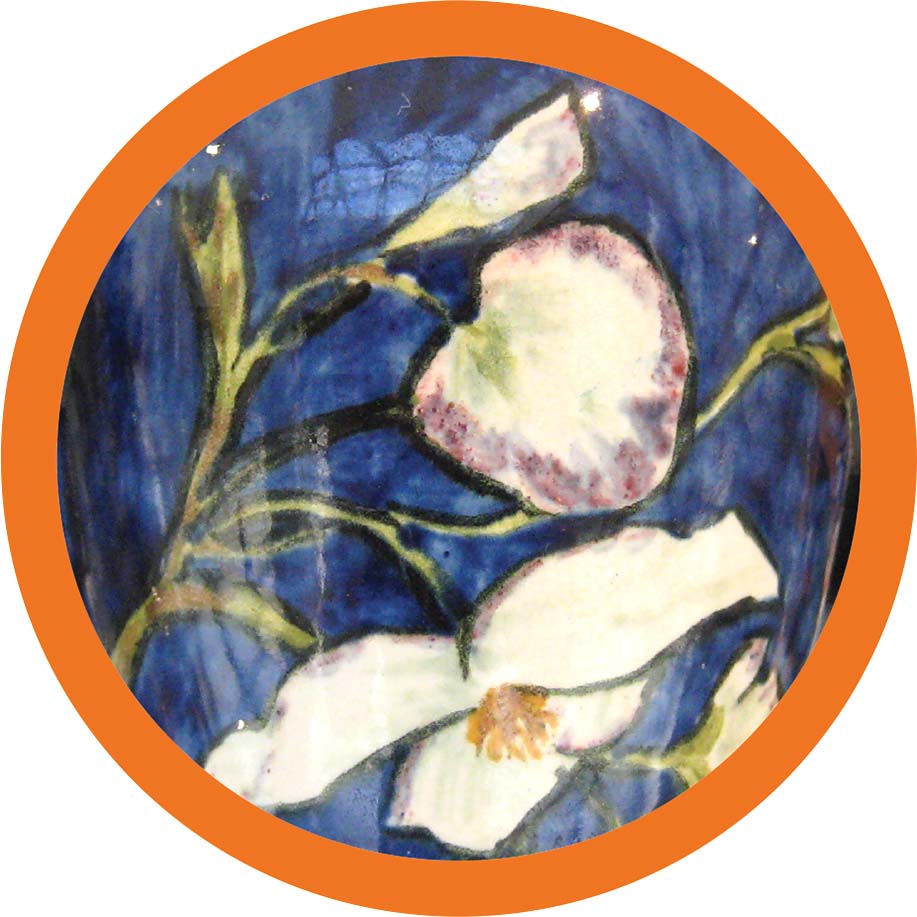 Maria Longworth was born in Cincinnati, on May 20, 1849. Granddaughter to Nichols Longworth, patriarch of the one of the region’s wealthiest families. Fascinated by the fine arts, she began to paint and play piano at a young age. In 1868 she married George Ward Nichols, a journalist who created the legend of Wild Bill Hickok. She graduated from the Cincinnati School of Design, a forerunner of the Cincinnati Art Academy and went on to become very skilled in ceramics. Her interest in pottery led to the creation of The Rookwood Pottery Company in 1880. She was the first woman to start a pottery business in Cincinnati. She hired both men and women including artists and a chemist and soon Rookwood pottery was a highly sought commodity, treasured for its beauty as well as its usefulness. In 1882 she won a gold medal at the Tenth Cincinnati Industrial Exposition.

After Nichols’ death in 1885, Maria married Bellamy Storer, a Cincinnati-born attorney who later became a congressman and foreign minister to Belgium (1896), Spain (1899), and Austria-Hungary (1902). During these years, she continued working with ceramics and won a gold medal at the Universelle Exposition in Paris in 1901.

After leaving Rookwood Pottery in 1890 to follow Storer’s political career, she spent the remainder of her life involved in the arts, writing and performing works of public charity. She died in Paris in 1932 at the age of 83. 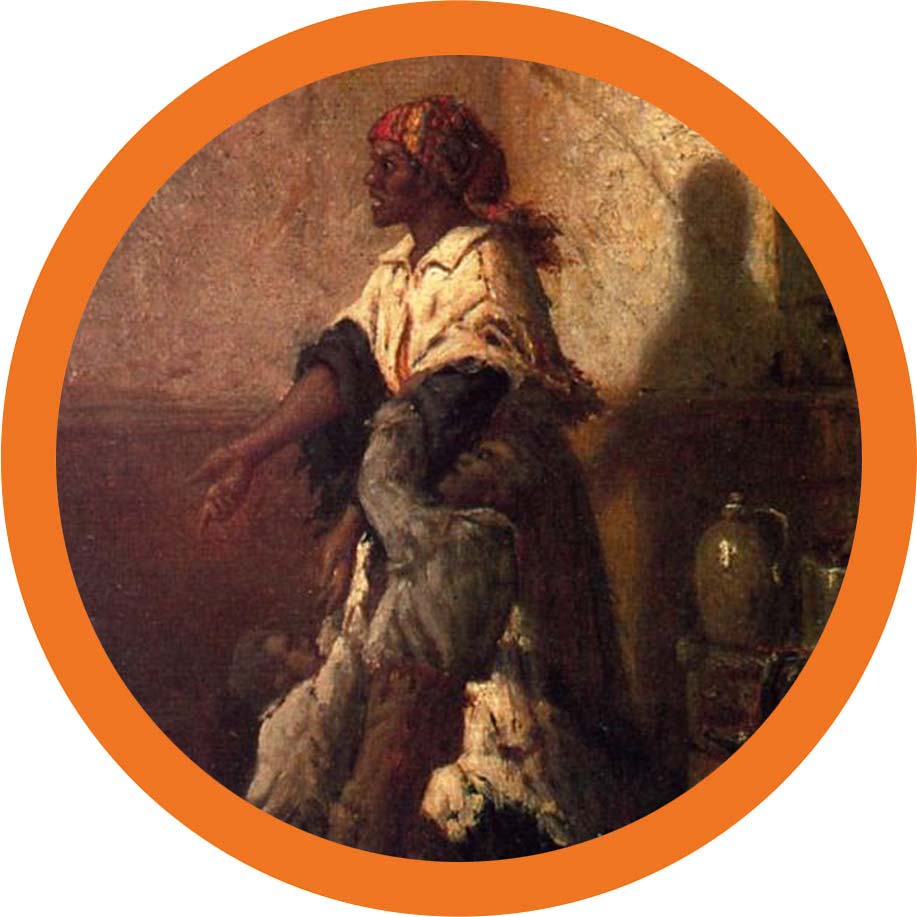 Thomas Satterwhite Noble, born on a plantation in Lexington, Kentucky in 1835, showed an interest in and propensity for art at an early age. He first studied with Samuel Woodson Price in Louisville, Kentucky, and continued his studies at Transylvania University in Lexington. He moved to Paris to study with Thomas Couture from 1856-1859.

His career as a burgeoning artist was cut short when the Civil War broke out and he joined the Confederate army from 1862-1865. After the war, Noble moved to St. Louis and began painting. Thanks to the success of his first painting, The Last Sale of Slaves, he received sponsorship from wealthy Northern benefactors for a studio in New York City. From 1866-1869 he painted some of his most well-known oil paintings.

Noble’s best-known works are historical or social/political presentations. He had, by this time, rejected slavery, despite having served the Confederacy. He is principally known for a series of four anti-slavery paintings: Last Sale of the Slaves (1865); John Brown’s Blessing (1866); The Modern Medea (1867); and The Price of Blood (1868). These paintings are notable for depicting the anguish and inhumanity of slavery and for including white oppressors in the imagery.